Kelechi Ezie (She/Her/Hers) (Marketing Manager) hails from Buffalo, New York. As a child she fell in love with the performing arts through dance class and Suzuki piano lessons. As a teen she found her voice and began to compete in national singing competitions and perform in her high school’s musicals. Kelechi attended Princeton University and graduated with honors in History and certificates in African American Studies and Theatre & Dance, also winning the department thesis prize for her original historical research. Upon graduation, she moved to New York to pursue a career in theater. Kelechi spent three years on the road with The Book of Mormon First National Tour as Mrs. Brown. She later debuted on television with a recurring role on the HBO drama The Deuce. Kelechi is also a writer. Her short film The Truth About Beauty and Blogs, which she wrote, starred in, and co-produced, appeared in several film festivals including Martha’s Vineyard African American Film Festival and Ebertfest, for which it was handpicked by the late Roger Ebert himself. Kelechi believes that the arts are an essential tool of self expression and connection for all children, not just the few that will pursue performance careers. She is extremely inspired by BBK’s mission and happy to spread awareness of the organization to families across New York and the world.

Since 2018, Jane Whitty has served as an Adjunct Instructor in NYU’s Steinhardt School, where she teaches a graduate class on marketing the performing arts. She is also on the board of Broadway Bound Kids, an arts education not-for-profit, serving kids throughout New York City.

Toby has worked in the non-profit industry for nearly 30 years supporting emerging artists. Before joining ETA, she was Executive Director of the Princess Grace Foundation-USA where, for over two decades, she led the organization through substantial growth and innovative new opportunities to support performing artists in theater, dance, and film. Prior to that, she served in senior roles directing institutional support at New York City Ballet and creating the development department for The Bronx Museum of the Arts. She holds a B.A. in mathematics and fine art from Brandeis University and an M.B.A. in marketing and non-profit management from Columbia Business School. She is an honoree of Columbia Women in Business, was featured in Town & Country's 2016 "Top 50 Philanthropists" issue, and was recognized by the Princely Family of Monaco with the Order of Grimaldi for her leadership. A native of New Jersey, Toby is a longtime resident of New York City where she and her husband have proudly seen their three children through NYC public schools.
​Lisa has a background in Fine Arts and Arts Education, but for her art is more than an education - it is a passion, a necessity of life. When Josi, her daughter, was 5 she was enrolled in her first BBK class. She continued performing in BBK productions until she graduated from High School. When Josi was in first grade Lisa was asked to design and create sets and props for BBK’s various productions. After two years of designing sets, she began to teach a newly created BBK Stagecraft class. The goal was to teach students to design and create sets and props. In addition, while Josi attended the Bayard Taylor school (PS158), Lisa and a team of parents designed and built the rooms for the various fund-raising events held at the school – including the annual haunted house. Becoming a part of the BBK family is something Lisa will always cherish. BBK gave Josi courage, the ability to speak in public, pride in her work, a strong feeling of community as well as life-long relationships. For Lisa, BBK allowed her to exercise her passion. She is so thankful and proud to be part of the BBK community.
Paul Kim is the Deputy Chief Information Security Officer (DCISO) of New York City and the Head of Threat Management for the largest municipality in the United States. He leads Incident Response, Cyber Threat Intelligence, Counter Threat Automation, and the 24x7 Security Operations Center for NYC Cyber Command. He also directs citywide cyber risk initiatives.

Paul is a former instructor at the Joint Military Intelligence Training Center, a member of the New York State Bar, and a Certified Information Security Systems Professional. He is a native of NYC, a volunteer and non-profit board member in Brooklyn, and a graduate of Wesleyan University, the University of Pennsylvania, and Boston University.
Samantha Blain is a Cuban multi-disciplinary creative artist and teacher based in NYC. A 2008 alum from Emerson College BFA Musical Theater Program and Atlantic Acting School. Holds a certification in Pedagogy and Curriculum Practice in Social Emotional Learning and Character Development from Rutgers University.  Sam has been a teaching artist with BBK since 2015. Programs she’s led and facilitated include lead Production Advisor for the past 7 years for the Broadway Jr. grant program with the Shubert Organization and Department of Education, mentor for Arthur Miller Fellows in Musical Theatre, lead teacher/director for summer, and after school productions. Over the last 12 years, she has taught and directed for several organizations including Move this World (curriculum development), NYU, Atlantic Theater Company, Broadway.com, Broadway Bound Kids, NYU, Shakespeare Theater of New Jersey, CO/LAB Theater Group, the United Nations School directing and running their drama program.
​
She is currently on the writing staff at Bay Area Children’s Theater first-ever BIPOC led Writers Room where she co-created and published the children’s book “Pocket Guide for Imaginary Friends”. She has performed Off-Broadway, regionally, in National Tours, in numerous Broadway workshops, TV/film, and is a member of Story Pirates. Other performance highlights include Ars Nova, New York City Center, York Theater Company, Drama League, BAM, New Victory Theater Lab Works, New York City Children’s Theater (NYCCT), American Dance Machine, La Mama ETC. Sam is Co-Artistic Director of the award-winning Hit The Lights! Theater Co. where she additionally takes on roles as grant writer and performer. Hit The Lights! was the 2018/2019 Company in Residence at Ars Nova, nominated for the 2020 Off-Broadway Alliance Award for “Best Family Production”, 2021 Little Island NYC’s Performer series, and collaborated with Vogue Magazine for their March 2021 Cover Spread.
Mark Stein is an Operating Officer experienced in the areas of merchandising, human resources, finance, operations and technology in a variety of businesses, with intensive experience in consumer products companies. Devoted to building highly functional teams, capitalizing on the genius of dynamic groups with diverse personalities.

Very strong roll-up-the-sleeves passion for companies preparing for and living through startup phase or rapid growth. Adept at building high performance diverse teams that are required to meet unyielding timeframes. A passionate lover of technology, exceptionally current on new advances and how to apply them to improve efficiencies. Devoted foodie with a passion for cooking. Periodic Crisis Counselor with Crisis Text Line. Investor in film and theatre productions.

​​Time Out New York Kids rates our After School Programs one of the "Best Programs in NYC!"

​Whether you're acting or doing makeup or just part of this community, it gives you a place and it also gives you a purpose.
​-John Stamos

I like being myself in Broadway Bound Kids, because that's what you're supposed to do.
-Neel Sethi (BBK Student and star of Disney's, "The Jungle Book")

Broadway Bound Kids has made me feel more confident about who I am and who I want to be in life. I’m out of my shell and I’m happy!
- A'mya (BBK Student) 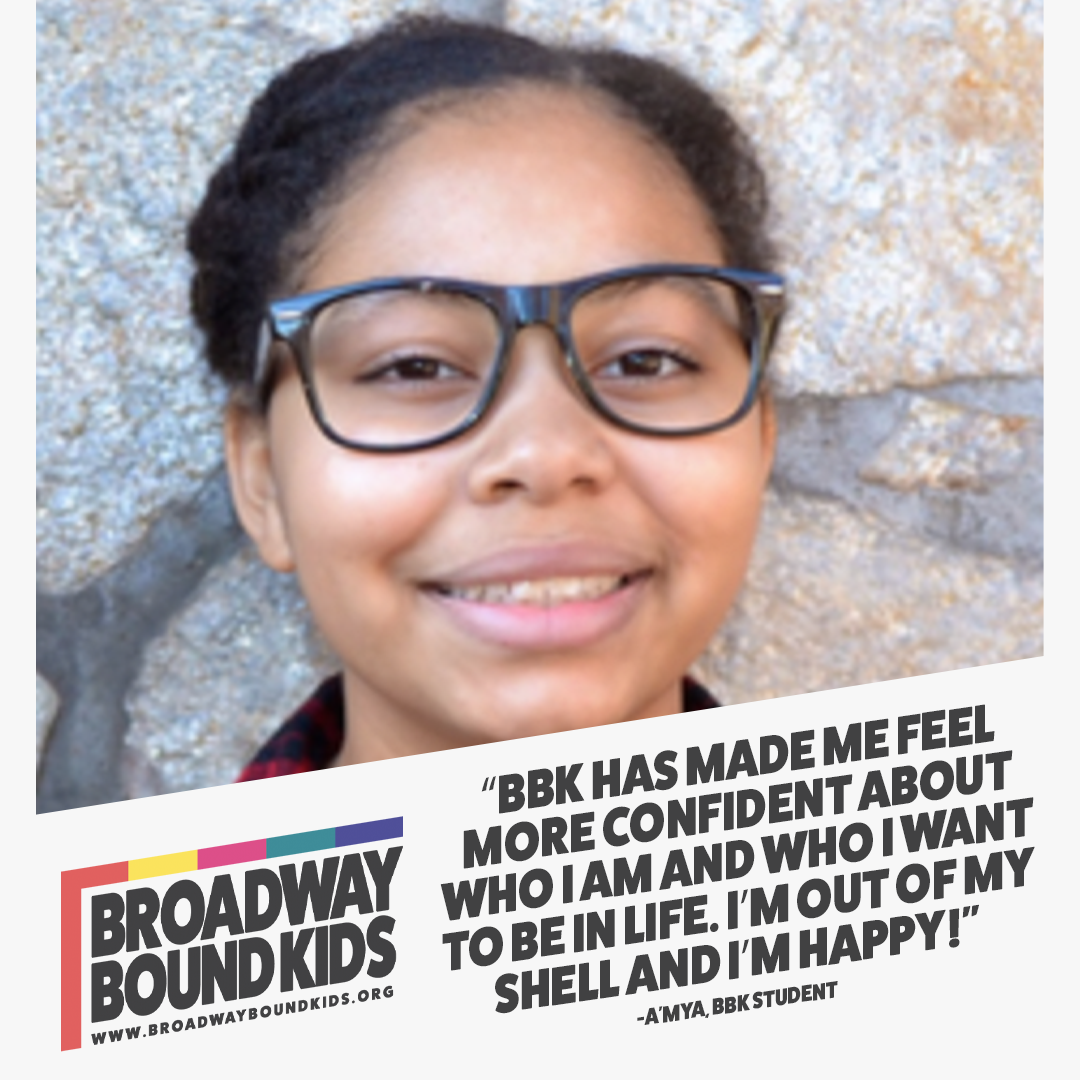 Broadway Bound Kids has helped me grow as a person because it has given me the confidence to take chances… the community is the family of brothers and sisters I've never had.
​- Olivia 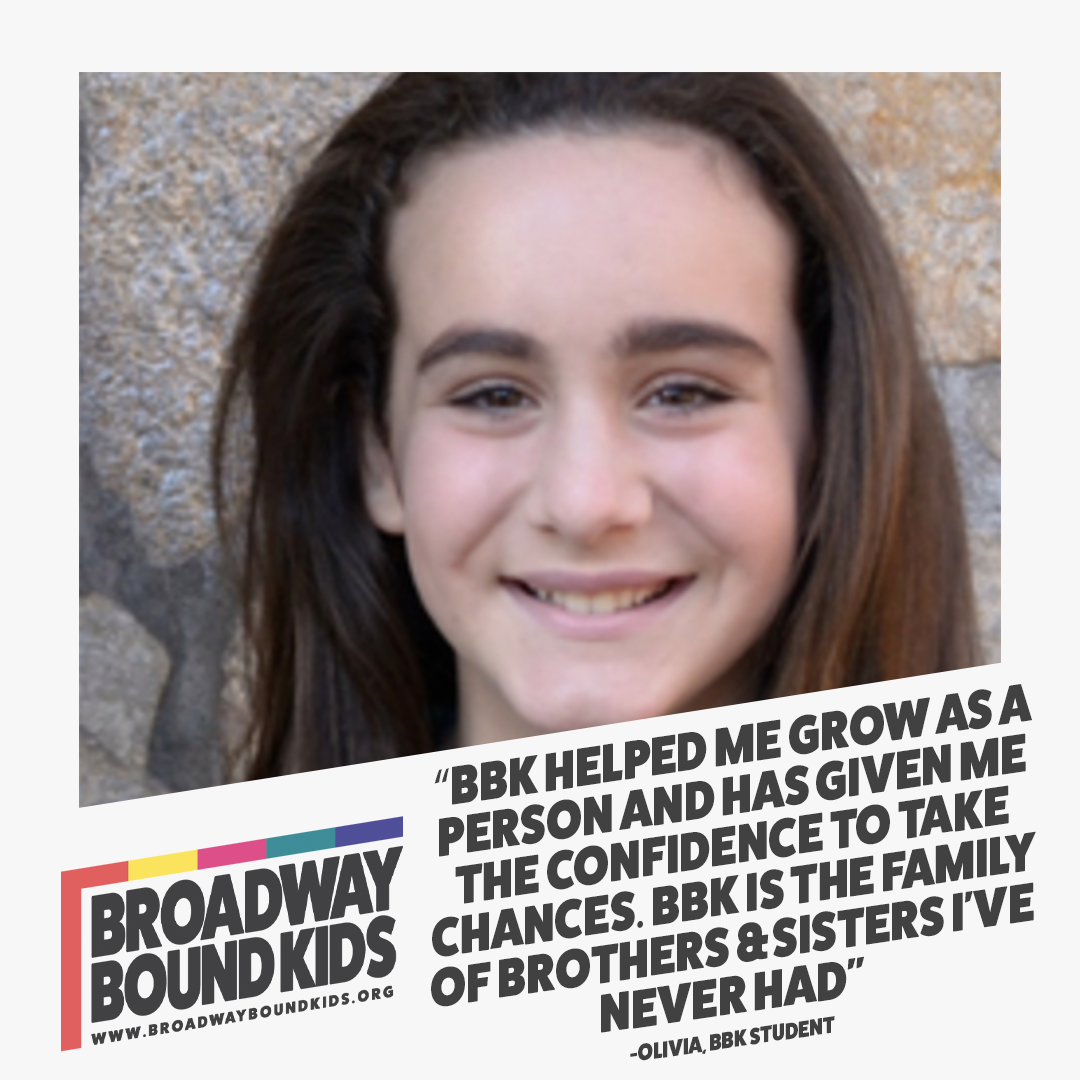